Discover Naples, The story of the little monk

Discover Naples is back, as every Monday, and keeps on telling stories and mysteries of the city! Today we’ll concentrate on one of the most nice tale of Neapolitan tradition: the story of the little monk! Between history, mysteries and kindness, let’s get to know more about the subsoil…

But before starting, if you missed the last appointement with Discover Naples, do not miss the chance to check it on Discover Naples, The mistery of Dracula’s grave, our last “trip” from Transylvania to Naples in order to discover one of the most mysterous tomb in the whole city!

Superstition in Naples has its roots in the people and its myths; among all of them there’s the munaciello one: a little ghostly presence, dressed up as a monk, who can make people rich or poor; which since ever represents one of the most important charachters of neapolitan folklore. 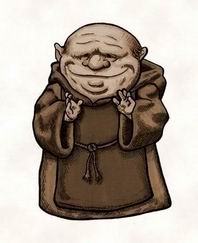 The little monk story has seculary origins, but the most accredited tales in reguard to them, are only two: the first legend tells that the little monk was a man who worked in water wells  and who was able- thanks to his being small-  to get in people’s houses through the canals in which the bucket was put. However these men were not always paid, so they used to steal jewlery and valuables from the families to which they give service.

Sometimes those objects were even given as gifts from the monks to their beloved. For this reason, according to the legend, the little monk is an entities who steals gifts.

The second legend is more complex that the first one and Matilde Serao was one of the firts person to write about it in her Leggende Napoletane. As told by the story, that of the little monk, might have been a real existing figure who lived in 1445. But this tale is even more that what you’d expect….

It is said about a love story born between Caterinella Frezza, daughter of a rich merchant, and Stefano Mariconda, a young roundsman. Since the girl’s parents were against their love, the two lovers used to hide in order to meet each other at nightime: Stefano even jumped on Naples cliffs to reach Caterinella. Until, one day, he fell off a cliff, dying. So the girl, who was pregnant, decided to close herself in a convent where she gave birth to a little, deformed baby. 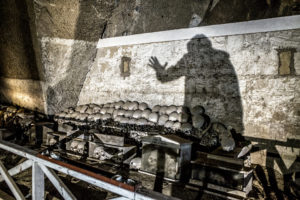 Regardless the asked graces to Holy Mary as well as dressing the baby as a little monk (from which the name munaciello), his health did not get better to the point that even the people living in his district started to be scared by him. After a period in which people tended to be disgusted from the little monk, there were some of them who changed their mind. They started to think that he had some kind of magical power which could be good or bad, depending on what hood he wore: the red one meant good luck, while the black one unluckyness.

After his mother death, the situation started to get worse and the little monk started to be considered as a cursed figure. People started to assoult him until one day when he disappeared, without leaving any traces.

After the munaciello’s death, neapolitan people started to see him walking around the city districts. Even today the legend is deeply felt among the Neapolitans, just as there are numerous testimonies of people who “had to do” with the spirit.

According to an old chronicle, many years ago, in Piazza Garibaldi, a young widow lived with her children. Although living with hardship, the woman was often helped by the munaciello who always treated her with respect and courtesy. Moved by the strength and tears of the widow, the spirit decided to hel her.

Taking advantage of the night coming, the munaciello often appeared which with kicks and beatings attacked the unfortunate passing by.

The two testimonies seem contradictory; in reality, the munaciello – believe it or not – will bring you plenty of luck and money if you don’t make him angry. Otherwise … they will be beaten and blinded!