Crusades, Templars and a mysterious cup: the Holy Grail in Naples. The story of the so famous cup takes us in a long trip which arrive in our city. As every week, this Monday too we’ll get to discover one of the most important and symbolic place in Naples: the Maschio Angioino castle awaits us…

But first! If you missed the last appointment with Discover Naples, do not forget to click on the link  Discover Naples, The story of the little monk to discover the myth of one of the most nice ghostly presence in Naples!

The story of the Grail

The cup which was used from Jesus during the Last Supper, as well as the being used to collect his blood after his death: the Holy Grail is, as the universal legend tells, the most fascinating and wanted cup in the world. Moreover the Grail seems to carry more than “just” a holy past: the possess of an esoteric and magical knowledge given by God, only reserved to those who are able to welcome it.

The origins of the Grail, however, are prior to the Middle Age: the myth of the cup is already identifiable in the Celtics sagas and it was only with the start of the Grail Cycle that this cup began to be identified with the one used during the Last Supper. But the connection lies in ethimology: san gral, from French, was tracked back to the expression sang real -royal blood.

The first literary evidence of the cup can be found in the Perceval ou le conte du Graal of Chrétien de Troyes, dating back to the XII century; in the text, however, the cup is not yet associated with Christ and the idea of ​​the holiness. The adjective “holy” to the cup, and the fact that it was the same used by Jesus during the last supper, was added between 1170 and 1212 Robert de Boron, in his Joseph d’Arimathie.

We can say that the Christianization of the legend coincides with the beginning of the research, also following the drafting of the Arthurian cycle in which there are numerous tales of knights who worked for the mission: Parsifal or Galahad are only two of the most renowned.

At the beginning of our journey, we mentioned how the Holy Grail hides esoteric meanings as well as being a source of knowledge. According to recent studies, royal blood would indicate the direct descent of Jesus, married to Mary Magdalene. After the crucifixion of Christ it would seem that the Magdalene (together with other women and her son) would have fled from Palestine to Provence.

Once she arrived, she would have gone up the Rhone to the Frankish tribe, descendants of the Jewish tribe of Benjamin in the diaspora. It was precisely because of this origin that the Merovingians, the first kings of the Franks, took the name of thaumaturgical kings (healers) for their ability to heal sick people with the touch of their hands.

There are also those who hypothesize that the Holy Grail is actually the Shroud. The historian Daniel Scavone hypothesizes that the story around the Grail was born from the many and fragmented news that arrived in the West about the burial of Jesus and of an object that collected his blood.

But what about Naples?

Maschio Aangioino castel, hall of the barons. The long journey of the mysterious cup arrives in Naples. But how is the story of the city linked to that of the Grail? It was during king Alfonso of Aragona‘s reign, that he decided to dedicat the castel to the cup.

King Alfonso was a man of great culture and also a great connoiseur of the Grail legend where it was said that Galahad, son of Lacelot, was the only knight so pure that he could occupy, without being killed, the “perilous seat“. The thirteenth throne of King Arthur’s Round Table was intended for the only man worthy of finding the sacred cup.

King Alfonso felt like a new Galahad. He therefore wanted to recreate in the Neapolitan fortress a symbolic analogy between the knight and himself. Just like Galahad acquired the right to sit in the thirteenth chair at the court of King Arthur ” 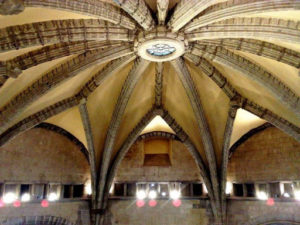 On June 21, the summer solstice: the sun illuminates the great room of the Barons crossing with its rays the largest window in the area. A ray hits the opposite wall creating an arc of a circle. This arc gradually transforms itself into a square and then into the shape of an open book: the book of knowledge. But the symbols do not end here because the sun’s rays discover another shape … The shape of the Holy Grail.

One thought on “Discover Naples, The Holy Grail in Naples”