Discover Naples, Santa Maria of the Souls in Purgatory 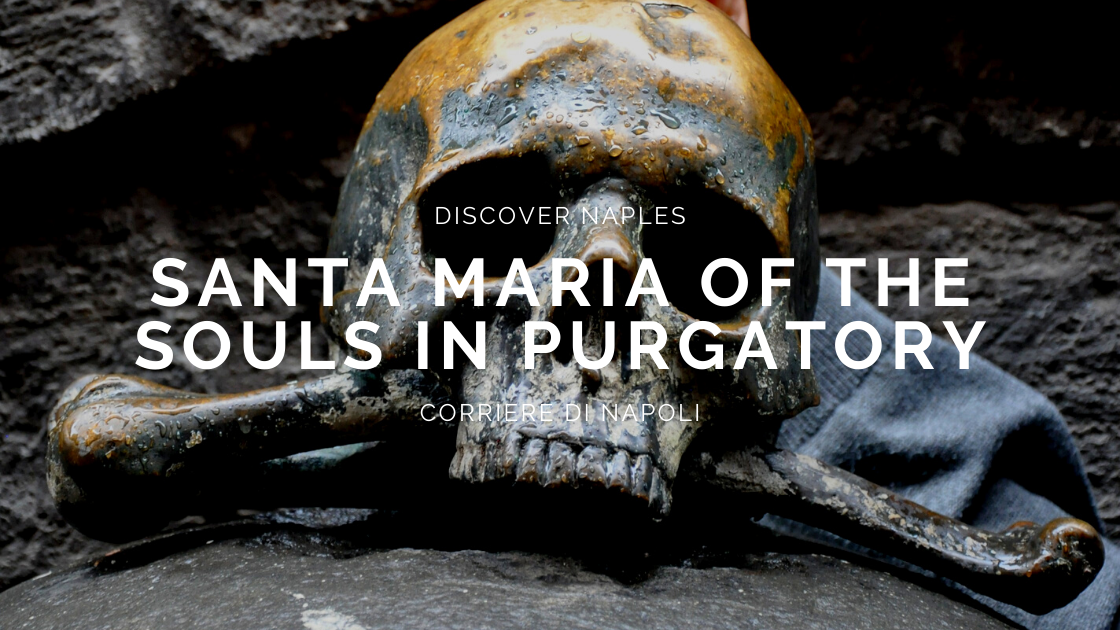 The trips to discover the secrets and the stories of Naples have reached the third appointment. Today with Discover Naples we’ll “visit” Santa Maria of the Souls in Purgatory, also known as Church of the deads’ heads (de’ ‘e cape ‘e morte).

In the heart of the ancient center of Naples, along Via dei Tribunali, there is the Church of Santa Maria of the souls in purgatory in Arco. Known to the Neapolitan people as the church “de’ ‘e cape ‘e morte”. Crossing the threshold, a real journey begins in the Neapolitan culture between art, faith, life, death.
Fom the small and beautiful church of the 17th century, which houses the precious marbles, the winged skull of Dionisio Lazzari, together with masterpieces by Massimo Stanzione, Luca Giordano and Andrea Vaccaro, descend into the ancient grandiose hypogeum which today houses the fascinating cult aimed at anonymous human remains that become special intermediaries for invocations, prayers, intercessions requests. A small museum set up in the spaces of the elegant sacristy completes the itinerary.

That of the souls in purgatory is an ancient, Neapolitan cult dated back to the 17th century. 1600 is also the year when the Church proposed the care of the souls of the deads as one of the main religious practices to establish, through prayers and masses, a liturgical link between past lives.

The ritual of the pezzentelle (asking, from latin petere) souls involved the adoption of a skull: cared for, cleaned and adorned, the chosen one was te soul to pray. The women who chose the capuzzella (little skull), placed it on a pillow and cleaned it. Making the soul “feel at home” was important,for this reason there were people who adorned the crypt with tiles and household item.

With great care and dedication, the niche was always clean and adorned with flowers and candles. At the end of the “procedure” one could pray that the chosen soul could be saved. Praying the dead’s soul also meant asking for graces and intercessions during dreams. If the soul had been saved, only then could have fulfilled the requests.

Among the numerous niches (newsstands) present in the underground spaces of the structure, the most famous ad loved by  Neapolitans and not only is certainly that of Lucia. The story is exciting and touches the heart of anyone who listens to it: a young bride who went to meet a sad fate.

In a turquoise newsstand, covered with veils, images, gifts and a diadem lies the skull of the unfortunate Lucia. It is said that the young woman, daughter of Don Domenico D’Amore, marquis of Ugento, had married the marquis of Santomago, Giacomo at the age of 16. Immediately after the wedding, however, she was struck by tisie and died.

A second version instead, tells that the young Lucia had a boyfriend for some time. The two loved each other very much and he, worried that the demons might intrude on their love story, had asked her in marriage.

Lucia, however, who was only 17, refused and asked him to wait. The years passed ad not even a shadow of marriage. The young man, discouraged, therefore decided to move to another city and start working as a worker in a gunpowder factory.

Lucia then, realizing that she could not live without her loved one, decided to start preparing the wedding. But a few days from the desired event, the groom died in an explosion in the factory warehouse. Lucia, taken with despair, put on her wedding veil and threw herself into a well.

The devotion to the unhappy bride, given her tale, is very strong especially among women lookinf for a husband: many are the requests for love and the miracolous powers recognised to her, but also invocations of release for relatives in jail.