The sea has never been friendly to man
-Joseph Conrad

The first appointment with Discover Naples opens with the Gaiola island and its mysteries. Between stories, sea, dedicated songs, the Gaiola remains at the same time a place of peace and mystery.

At the foot of Posillipo hill there’s the Gaiola Island. A protected marine area which extends from Baia Trentaremi to Marechiaro’s borough. Between vulcanological elements, archeological remains and finds on the seabed, the scenario is one of the most suggestive in the whole Partenopean territory.

The Submerged Park is now a protected marine area, established in 2002 with a interministerial decree. It is now handled by Soprintendenza Archeologica, Belle Arti e Paesaggio per il Comune di Napoli.

Its name comes from latin cavea (little cave) which neapolitan dialect transformed into caviola. In the past it was known by the name of Euplea, protectectress of navigation and safe haven.

Higly haunted both in winter and summer, the island can be reached by swimming from the beach below the Virgiliano Park. What remains are the sediments of a coast which was inhabited from the 1st century BC. That’s why the whole little island is entirely surrounded by Roman finds on the surface and beyond.

The beach can be reached through the descent of the Gaiola which, from via Tito Lucrezio Caro, descends to the sea. A first stretch can be traveled by car (but a scooter is way better), but then it is necessary to continue on foot.

Beauty and mistery: the Gaiola island lives surrounded by chronicles and mysterous deaths. Considered by Neapolitans an unlucky place because of all the people who lived there hit by misfortunes. There are many legends and wyths which accompany the history of the island.

All Neapolitan people know, for sure, that a curse hangs over the villa. Bad luck has pursued it and the building has been uninhabited for forty years. Auctioned, it subsequently became property of the Campania region.

Virgilio: the poet magician. The beginning of the curse.

Legend has is that near the villa, in Roman times the magic school of Virgilio was built. Place where the poet taught magic and alchemy. The story goes that the islet found under the effect of the curse precisely because of one of the poet’s pupils. Curse that would bring bad luck and death to the inhabitants of the place in the centuries to come.

LUIGI NEGRI- In 1871 the villa (built by Publio Vedio Pollione) was sold to Luigi Negri, founder of the Italian fish farming company. A purchase that doesn not last long. Negri sells the villa after a year only because of the bankruptcy of his company. 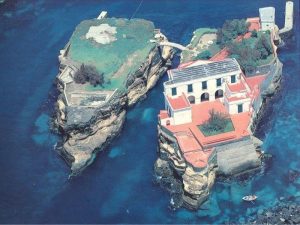 HANS BRAUN- The fate of Hans Braun was quite different and far more tragic than that of the previous buyer. Murdered in unclear circumstances, his body was found wrapped in a carpet. The Braun widow survived her husband, but for a short time. After a few months, in fact, she drowned in the sea around the cursed island.

MAURICE SANDOZ, GIOVANNI AGNELLI AND PAUL GETTY- Founder of the pharmaceutical company that bears his name, Sandoz purchased the villa in 1950. But the curse does not cease and the former owner dies suicidal in the asylum. There he is locked up after his stay in the Neapolitan villa. Shortly after, the building was purchased for a short time by Giovanni Agnelli, who gave it to Paul Getty, whose son would be kidnapped by‘ndrangheta in 1973.

ELENA VON PARISH- The most famous story s certainly that of the Marquis Von Parish. In 1926 a cable car was installed to connect the island to the mainland. One night a terrible storm erupts and the Marquise, returning from the island, remains a victim of a broken cable. Her body was never found and the man who housed her on the island. Then she committed suicide shortly after because of the remorse for having led her to the unfortunate place.

The Gaiola island is one of the (many) places surrounded by mistery. Tales continue with Discover Naples! Do not miss any news:

2 thoughts on “Discover Naples, The mistery of Gaiola island”