A sauce that has a very long history and an unmistakable smell: the story of the Neapolitan ragù starts from afar and is steeped in legend. From Provence to Naples, let’s discover together the origins of o ‘rraù! 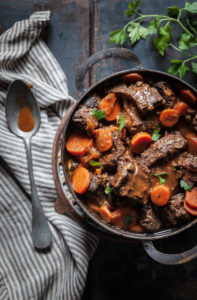 In order to discover the true origins of the Neapolitan ragù, we have to take a few steps back to the Provencal kitchens during the Middle Ages. Right here, in fact, Daube de boeuf was prepared, an ox meat stew mixed with vegetables and cooked for many hours in a clay bowl. Starting from the stew, over the centuries, you get to the ragout: same preparation, but with mutton meat.

We are in the eighteenth century, when the ragout begins to make its first appearances in the rich Neapolitan kitchens; however it continued to be a simple stew of meat and vegetables, without tomato. Even Cavalcanti, in his Theoretical cuisine, will talk about the stew calling it “red broth”: a sauce that was used to season macaroni, without mentioning the presence of tomato.

Over time the sauce has undergone changes, while maintaining the base and the concept unchanged: the possibility of having a single dish with a single preparation!

But why this name? 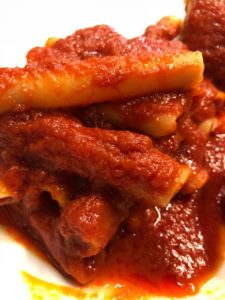 The term ragù or ragutto defines a tomato-based dressing with pieces of meat or minced meat cooked for many hours on low heat. In any case, as you could have guessed by reading its origins, the word ragù is nothing more than a deformation of the French term.
A change in pronunciation that can be easily attributed to Neapolitan dialect. These changes in pronunciation can be also found in terms such as sartù, gattò, crocchè, mashed: all words derived from French.

It is well known that the period between the eighteenth and nineteenth centuries in Naples was marked by the reign of Ferdinand IV of Bourbon: a court influenced by French culture in all areas, including the culinary one …

You may also like The king of pastry: the babà!

However, the question related to the name of the ragù did not stop and in the period of the Twenties the regime wanted to Italianize the term into “ragutto” as (deriving from French) not purely Italian …

Neapolitan culture is rich in stories and legends. Here at Corriere di Napoli we know it well and have made a column of it: Discover Naples. Of course, the Neapolitan dish par excellence also has its own legend and begins in the late 1300s…

According to history in Naples, around the fourteenth century, the Company of the Whites of Justice existed. They were a group that traveled the city to spread the message of  “mercy and peace”. It was during one of their tours that they came across the palace of one of the most hated lords of the city: Palazzo dell’Imperatore.

A gentleman as rude as cruel, and whom everyone tried to avoid. The preaching of the company convinced the population to reconcile with their enemies, but only the nobleman who resided in the “Palazzo dell’Imperatore” decided not to accept the invitation of the whites, always nurturing ancient and tenacious grudges. He did not give up even when the three-month-old son, in the arms of the nurse, took his hands from the swaddling clothes and, crossing them, shouted three times: “Mercy and peace”
–source

The gentleman was blinded by anger, and it was on this occasion that his wife prepared him a plate of macaroni, in order to soften him and try to make him change his mind about his behavior. Providence intervened and filled the plate with blood, making it become completely red!

Convinced of the prodigy, the gentleman decided to follow the teaching of Companions: forgive his enemies and dress white. On the occasion of the decision, his wife prepared the macaroni and magically turned red. However, this time they were fragrant and inviting! The gentleman, in tasting it, found that it was really good and tasty so he called it “raù”. The same name as his baby’s!

One thought on “The story of Neapolitan ragù: from Provence to Naples”

Sab Lug 25 , 2020
Naples is its birth place, so when you try a Neapolitan pizza you are tasting the authentic one. Pizza is something that we take seriously in Naples!